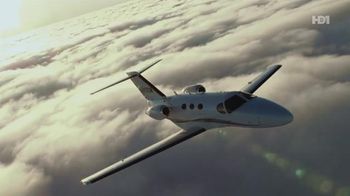 The Cessna 510 Citation Mustang is a very light jet (VLJ) class business jet built by Cessna Aircraft Company at their Independence, Kansas production facility. The Mustang, in standard configuration, has four passenger seats in the aft cabin, a toilet and seating for two in the cockpit. Like most other light jets, the Mustang is approved for single-pilot operation.

The Mustang is a low-wing cantilever monoplane with a swept wing, T-tail and tricycle retractable landing gear. One main door is located in the forward left section of the aircraft, with an additional emergency exit on the center right section of the fuselage. The airframe is primarily of aluminum alloy construction, with a three spar wing. Power is provided by two Pratt & Whitney Canada PW615F turbofan engines, mounted in pods on the aft fuselage.

This page contains all films, TV series, and video games that feature the Cessna 510 Citation Mustang.