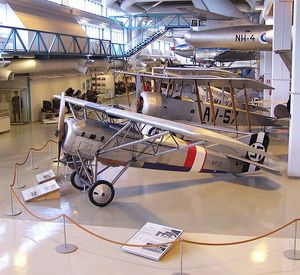 The Gourdou-Leseurre GL.2 was a French fighter which made its maiden flight in 1918. It was a development of the Gourdou-Leseurre Type A which had shown pleasing performance during testing but which had been ultimately rejected by the Aéronautique Militaire due to concerns about the rigidity of the wing. Twenty examples were delivered in November 1918, designated GL.2C.1 in service, but the end of the war meant a loss of official interest. Gourdou-Leseurre continued development anyway, and by 1920 had an improved version, designated GL.21 or B2 ready for exhibition at the Paris Salon de l'Aéronautique that year. This differed from the GL.2 mostly in having revised ailerons and a batch of twenty were purchased by the Aéronautique Militaire as the, with another one being purchased by Finland for evaluation. Two years later, a further revision of the design appeared as the GL.22 or B3. This proved to be a moderate success for Gourdou-Leseurre, selling to the Aéronautique Maritime as the GL.22C.1, as well as Finland, Czechoslovakia, Estonia, Latvia, and Yugoslavia. Specialised aerobatic versions were produced as the B6 and B7 for Jérôme Cavalli and Fernand Malinvaud respectively, with a second B7 built for Adrienne Bolland.

This page lists all films that feature the Gourdou-Leseurre GL.2.