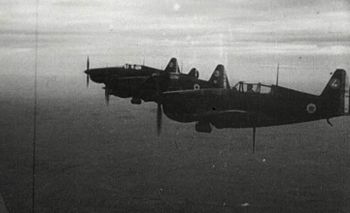 The MS.406 was a French Armée de l'Air fighter aircraft built by Morane-Saulnier starting in 1938. Numerically it was France's most important fighter during the opening stages of World War II. Although sturdy and highly maneuverable, it was under-powered and weakly-armed when compared to its contemporaries. The MS.406 held its own in the early stages of the war (the so-called Phoney War), but when the war restarted in earnest in 1940, 387 were lost in combat or on the ground (for various reasons) for 183 kills in return. The type was more successful in the hands of Finnish and Swiss air forces who developed indigenous models designated Mörkö-Morane and EKW D-3800.

This page lists all films that feature a variation of the Morane-Saulnier MS.406 .