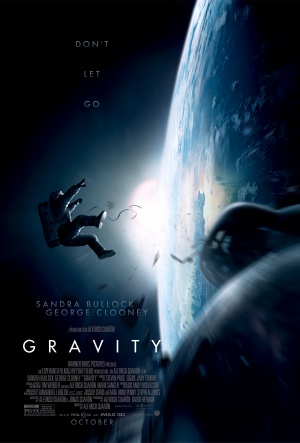 During a routine repair mission to the Hubble Telescope, the crew of STS-157 encounter a debris field that incapacitates their shuttle. Mission Specialist Dr. Ryan Stone, with the help of space veteran Lt. Matt Kowalski, must overcome all the odds and find a way back to Earth.

This fictional example is named Explorer.
The Lockheed Manned Maneuvering Unit was used only on three missions and so would not have its place in this story !

Being serviced by the Explorer.

Dr. Stone and Lt. Kowalski make their way to the ISS in the hope of utilising the Soyuz capsule.

Dr. Stone manages to separate the Soyuz spacecraft from the ISS before it is destroyed by the debris field.

Separating from the ISS.

The Service and Orbital Modules have detached leaving the Re-entry Module.

Tiangong is a space station currently (2014) under development by China.

Shenzhou is a Chinese spacecraft similar to the Soyuz.

Attached to the Tiangong.

Separation from the space station as it skims the Earth's atmosphere.

Shenzhou without it's solar panels.

Attempting re-entry into the Earth's atmosphere.