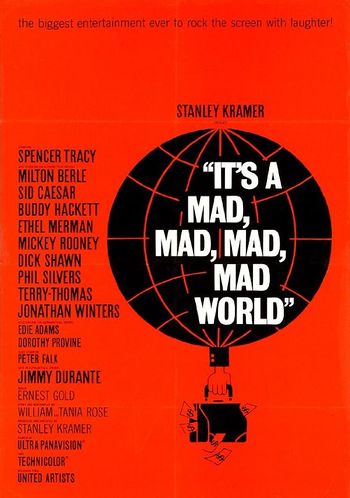 An all-star cast of crazies races across southern California in search of a cache of stolen cash.

This rather dilapidated example (built in 1916) is chartered by Melville and Monica Crump (Sid Ceasar and Edie Adams).

Melville Crump tries to talk his wife Monica into boarding.

Taxiing into the restaurant set at the former Rancho Conejo airport.

Flying through a hangar at what is now the Charles M. Schulz - Sonoma County Airport.

Operated by an unidentifed law enforcement agency, this example follows a car driven by two of the minor characters.

Several scenes are among or near airfields and then we can see lots of aircraft in the background. Here are some example of those guess in the distance.
(right) Cessna 150/152s.

The V-tail of a Beechcraft Bonanza is easy to find among what seem to be (from left to right) a Cessna 150, a Stinson 108 (?), a blue and white Piper PA-28(-180 ?) Cherokee with (near the right hangars) a North American/Ryan Navion and an unidentified taildragger aircraft.