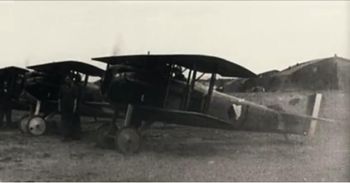 The SPAD S.VII was the first of a series of highly successful biplane fighter aircraft produced by Société Pour L'Aviation et ses Dérivés (SPAD) during the First World War. Like its successors, the S.VII was renowned as a sturdy and rugged aircraft with good climbing and diving characteristics. It was also a stable gun platform, although pilots used to the more manoeuvrable Nieuport fighters found it heavy on the controls. It was flown by a number of the famous aces, such as France's Georges Guynemer, Italy's Francesco Baracca and Australia's Alexander Pentland. The SPAD S.VII had been operated by many air forces throughout the world.

This page lists all films that feature a variation of the SPAD S.VII.