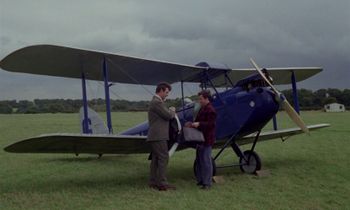 de Havilland DH.60 Moth seen in The Devil Rides Out.

The de Havilland DH60 Moth was a 1920s British two-seat touring and training aircraft that was developed into a series of aircraft by the de Havilland Aircraft Company. The DH60 was developed from the larger DH51 biplane.The first flight of the Cirrus powered prototype DH60 Moth was carried out on 22 February 1925. Deliveries then commenced to flying schools in England. The original production Moths were later known Cirrus I Moths, followed by improved re-engined version designated DH60G Gipsy Moth, and a metal-fuselage version designated DH60M Moth. Also in 1931 a variant of the DH60M was marketed for military training as the DH60T Moth Trainer. In 1931 with the upgrade of the Gipsy engine as the Gipsy II, de Havilland inverted the engine and re-designated it the Gipsy III. The engine was fitted into a Moth aircraft, which was re-designated as the DH60G-III Moth Major. The DH60T was re-engined with the Gipsy III and was re-designated the DH60T Tiger Moth for a while, but combination with other improvements of its structure were considered great enough that the aircraft was re-designated the de Havilland DH82 Tiger Moth.

This page lists all films that feature a variation of the De Havilland DH60 Moth.