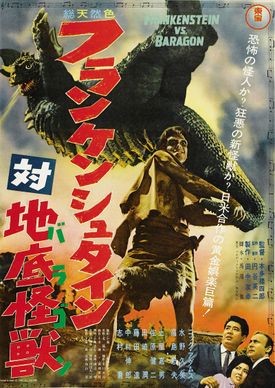 The immortal heart of Frankenstein is sent to Imperial Japan in 1945 following the defeat of Nazi Germany. It is in the Hiroshima Army Hospital when the US destroys the city with an atomic bomb. Fifteen years later, scientists specializing in radiation treatments are astonished at the discovery of a feral boy who, it turns out, is Frankenstein regrown from his immortal heart. He soon grows gigantic and escapes into the Japanese Alps, where his efforts to live peacefully are hindered by the subterranean monster Baragon, for whose vicious attacks Frankenstein is blamed. As Baragon continues his rampage through the countryside, Frankenstein eventually intervenes to protect the scientists who raised him after he was discovered as a child.

American bomber which sights the Japanese submarine on its way to meet with the Germans, forcing it into a crash dive.

Another one sinks the German sub.

Bowen, Kawaji and Sueko rent this helicopter to search for Frankenstein near Mt. Fuji. Later, they use it to airlift food to him. Registration JA9003, Serial 1631.