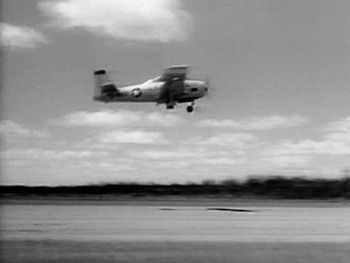 The North American Aviation T-28 Trojan is a piston-engined military trainer aircraft used by the United States Air Force and United States Navy beginning in the 1950s. Besides its use as a trainer, the T-28 was successfully employed as a Counter-insurgency (COIN) aircraft, primarily during the Vietnam War. T-28s were also used by the CIA in the former Belgian Congo during the 1960s. France used locally re-manufactured Trojans for close support missions in Algeria. The Philippines utilized T-28s (colloquially known as "Tora-toras") during a series of unsuccessful coups d’état during the 1980s, the aircraft were often deployed as dive bombers by rebel forces.

This page lists all films that feature a variation of the North American T-28 Trojan.