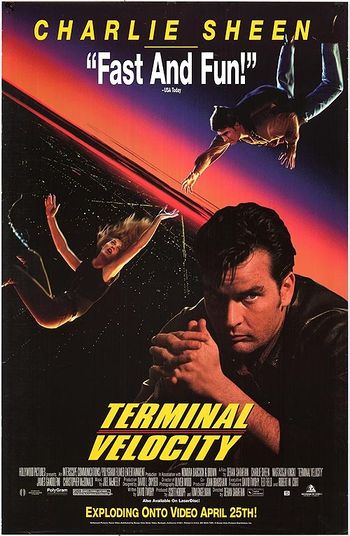 Ditch Brodie is an instructor of free fall and parachute jump. One day a pretty girl asks to make her first jump, and at a moment of distraction from the instructor, she falls like a stone and dies on the ground. Ditch conducts his investigation, believing that appearances are deceptive.

Engineless Lockheed EC-121 Warning Star in the background but unidentified yellow plane and rear of what seems to be the tail of a Sikorsky UH-34 of the Navy (used in Antartica).
Tip tanks are from Lockheed P2V Neptune.

Registration D-ABYS, c/n 21644/356 built in 1979. Former Lufthansa Boeing 747-200 wearing the name of East German airline Interflug despite this society never used the Boeing airliner and was already disbanded.
(top center) An Airbus A300 or A310 of Pan Am near two American Airlines McDonnell Douglas DC-10.

The blurred biplane is not identified.