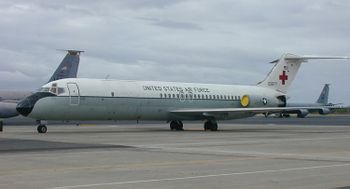 A USAF C-9A Nightingale, a military version of the DC-9.

The McDonnell Douglas DC-9 is a twin-engined, single-aisle jet airliner developed for short, frequent flights, especially in the U.S. domestic market. It is the smallest of a series of aircraft, including the MD-80, MD-90 and the Boeing 717, after Boeing took over McDonnell Douglas. The aircraft was also operated (designated the C-9) in small numbers by the U.S. Air Force and Navy as aeromedical evacuation and passenger/cargo transportation aircraft respectively.

This page lists all films that feature a variation of the McDonnell Douglas DC-9.